The urge to explore battles the desire to relax during a trip to one of the South Pacific’s best-kept secrets. Nicole Byers says Kia Orana to the Cook Islands.

They say “music soothes the savage beast”, and after witnessing the effect PapaJake’s dulcet tones had on a travel frazzled three year old, I would have to agree. After a short but awkwardly-timed flight, daughter Ellery, husband Tom and I shuffle bleary eyed into Rarotonga Airport to be met by a welcome blast of cool air and the soothing sounds of local legend Papa Jake. Jake has serenaded visitors since the airport opened in the early 1970s, even missing a big tourism award win in 2011 because the ceremony clashed with plane departure times. A master of the ukulele, he sings a soothing mix of local tunes and well-loved classics (Leaving On A Jet Plane, anyone?) in that dreamy Polynesian style that makes you feel like you’re in a movie. A smiling stranger slides fragrant floral leis over our heads.

We were soon to discover these soulful songs would become the backing track for an unforgettable stay in paradise. Scattered around the South Pacific Ocean, the Cook Islands are not yet what the Aussie tourist mecca-famed neighbour, Fiji, has become. And in many ways it’s richer for it. Sure, you may have to do a little more legwork to uncover the best spots to eat, drink and play, but the adventures you have along the way more than make up for it. In fact, it’s the seamless blending of the laidback local culture with the smattering of, mainly Kiwi, tourists that creates the magic of our trip to the largest of the Cook Islands, Rarotonga. From wandering through the vibrant Punanga Nui Market in search of fresh coconut juice and local handicrafts, to watching Ellery splash in impossibly turquoise waters with the local kids – not to mention my very urban husband being schooled in the art of coconut husking – we felt instantly welcomed. We even enjoyed the hospitality of some entrepreneurial locals who have built a gorgeous private property called Aramoana (“pathway to the ocean”) to rent out. Water gently lapped the deck as we sat with our new friends watching the setting sun turn the sky a kaleidoscope of pinks and reds, enjoying local delicacies served by resident chef Tik Tok. (You really must try local dish Ika Mata – a raw fish salad cured in lemon juice with coriander and whatever else the chef has juiced their version up with.)

The sedate seas, sprawling sands and crystal lagoons surrounding the island are juxtaposed by the wild rainforest, dramatic valleys and volcanic peaks of its interior. For me, tropical holidays are traditionally best spent swaying in a hammock, but the island’s manageable circumference of just 32km left us no excuse not to get exploring. I can confirm a trip into the centre for whimsical waterfalls and views of the famous “needle” rock are worth leaving your sunbed for. While we could easily have driven ourselves on the blissfully uncongested roads, we would have missed out on the passion of our guide, who took us to various points of significance, proudly sharing the region’s fascinating history. From the famous tales of Maori ancestors’ migration by canoe, to the people power of the locals who have managed to keep Raro, as it’s lovingly known, free from the Western creep of fast food chains and high-rise developments. “No building is taller than a coconut tree”, the tourism website gleefully brags. If bobbing in the blue is more your style, may I suggest a glass-bottom boat cruise. Being the Cook Islands, our skipper and his crew double as accomplished musicians, using upturned petrol drums and other handmade instruments to accompany their harmonies. They serenade us to snorkelling sites that are home to giant clams, turtles and all manner of friendly fish. To be honest, you could even skip the snorkel and spy all the action from the boat – the water is that clear. 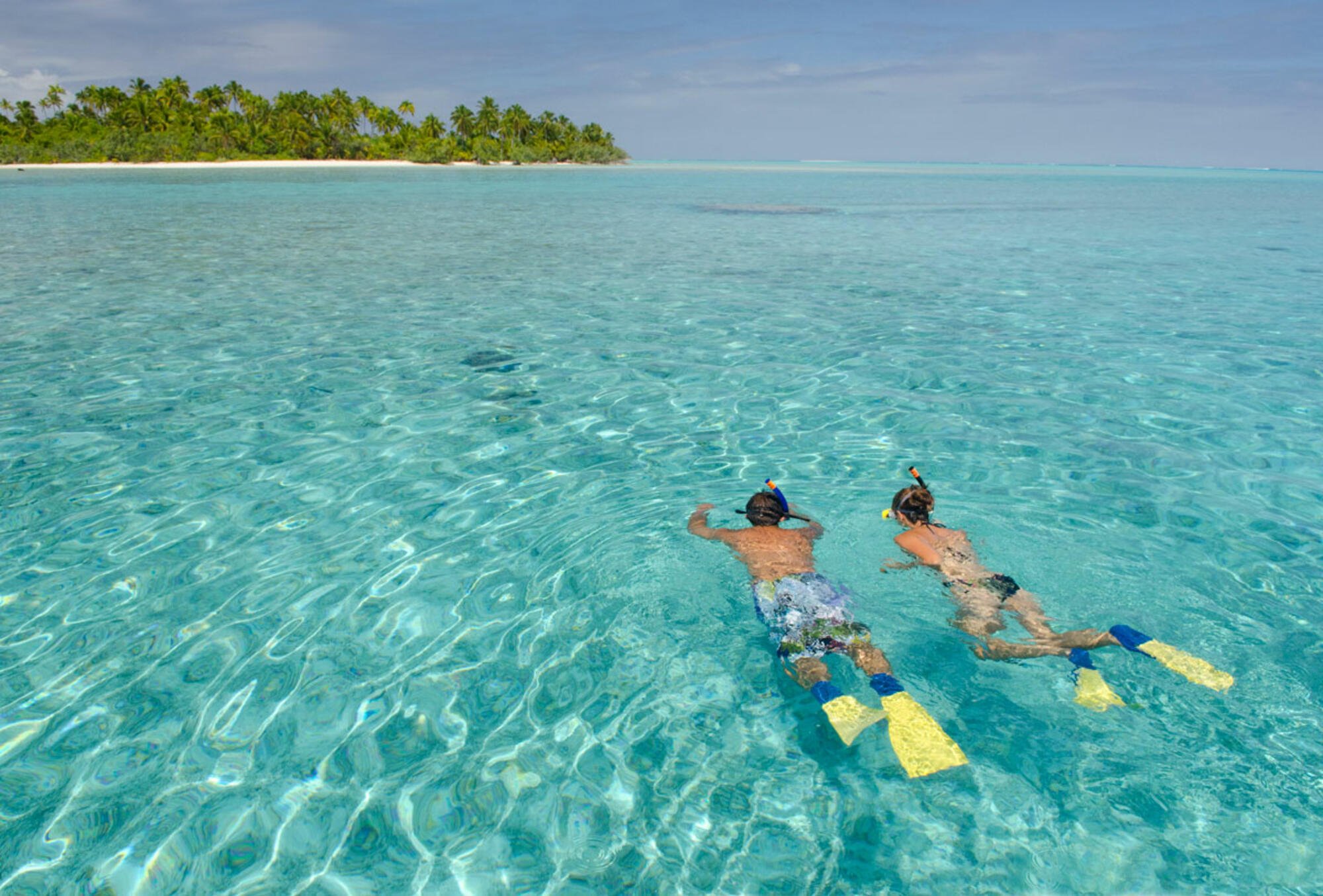 With the tunes of the day installed as friendly earworms, we scrub up to visit the Te Vara Nui Cultural Village for its famed over-water show. Turns out it’s not just musical prowess the Cook Islanders are genetically imbued with – they’re handy on a dancefloor, too. Folkloric tales are brought to life with masterful fire twirling, hip-shaking hula and enough flair and fireworks to engross a hungry husband and an over-tired toddler long enough for me to sneak a second helping of Ika Mata from the groaning buffet. 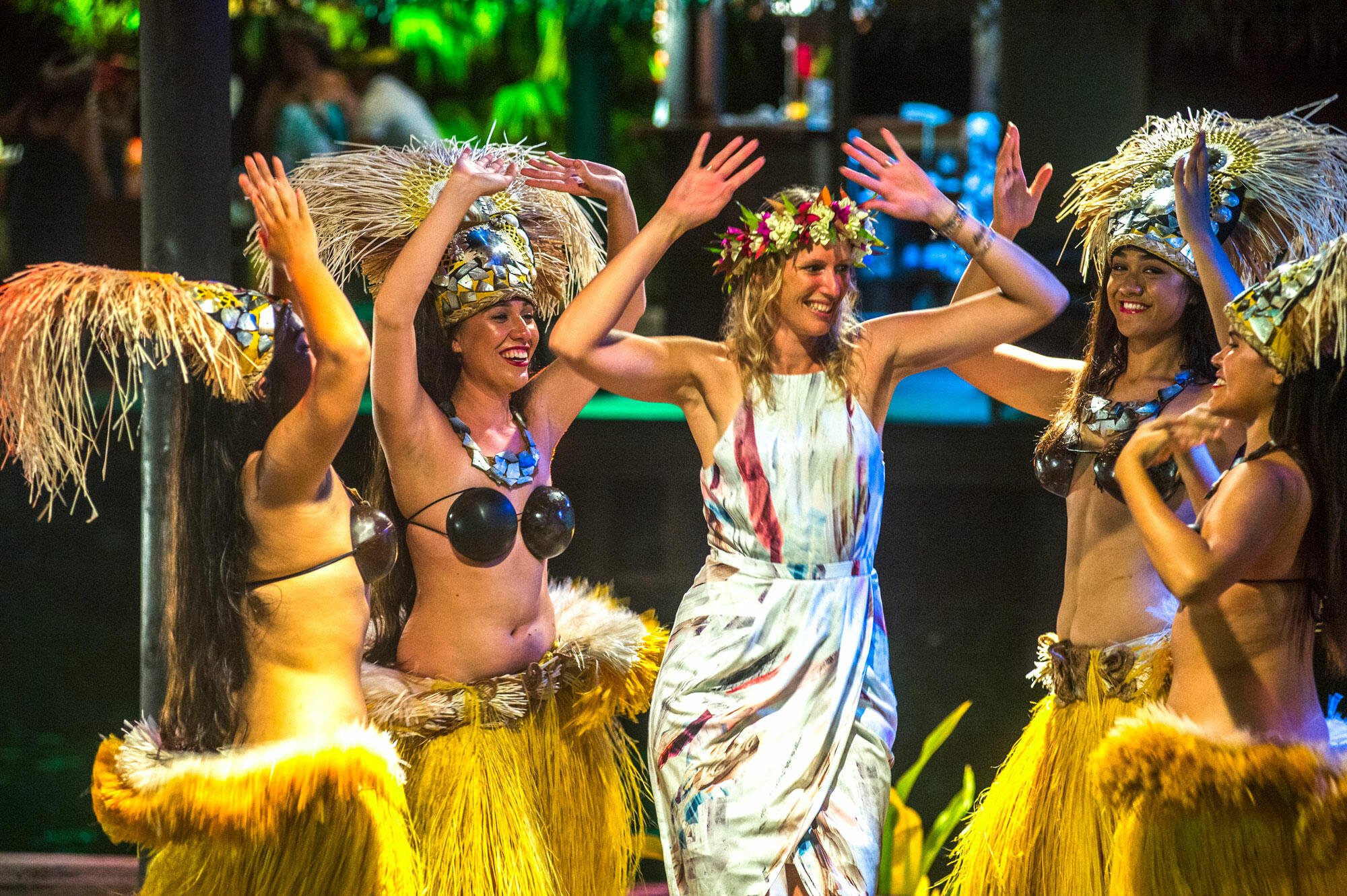 Next stop, Aitutaki. I’m told the flight into this tiny atoll is quite spectacular, but due to an irrational fear of small aircraft, my eyes are jammed tightly shut until safely on the tarmac of the cutest little airstrip I’ve ever seen. Fresh leis in place, we are whisked to a beach bungalow that would give Bora Bora or the Maldives a run for their money. It’s Robinson Crusoe meets the Ritz, with wooden doors sliding open to a private deck over the whitest of white sand. At night the beach comes alive with the crunch of thousands of tiny hermit crabs. They give the impression of a ballet of dancing shells as they scuttle over coral and sand, blowing Ellery’s young mind.

Our more worldly minds are blown the next day, when we travel by traditional Waka-style boat to One Foot Island – a picture perfect idyll that defies description. No paradise conjured in any fantasy could outdo this place for palm-tree fringed perfection. The tepid waters are the greenest, bluest and clearest sight you’ve ever seen. Suffice to say, any trip to the Cook Islands would not be complete without exploring Aitutaki. Just be sure to set at least one day aside for some world-class hammock swaying.