Mauke is home to approximately 300 people and is roughly half the size of Rarotonga in circumference however, it is a world away in landscape and lifestyle.

40 kilometres from its closest neighbouring island, Mitiaro, and 70 kilometres from Atiu, Mauke’s central volcanic plateau is surrounded by a ring of jagged, razor-sharp fossilized coral (or ‘makatea’) which reaches up to 1,000 metres inland. Due to the island's volcanic origin, the soil is extremely nutrient rich which creates green and lush grounds, thus giving the island the name 'the garden island'.

CAVES AND LAKES
Deep underground caves and lakes honeycomb the island of Mauke. Vai Tango, is the by far the most easily accessible freshwater cave, with recently built steps and a railing blended well with its surroundings. In fact, it’s new facelift compliments the site making it even more attractive than before, with a deep clear pool under the overhanging stalactites. Locals often swim here on Sundays after church. Other freshwater caves include Moti Cave; a large, open cave nestled in amongst the makatea and Motuanga Cave, also known as the ‘Cave of 100 Rooms'. Limestone growth has made all but three rooms inaccessible. 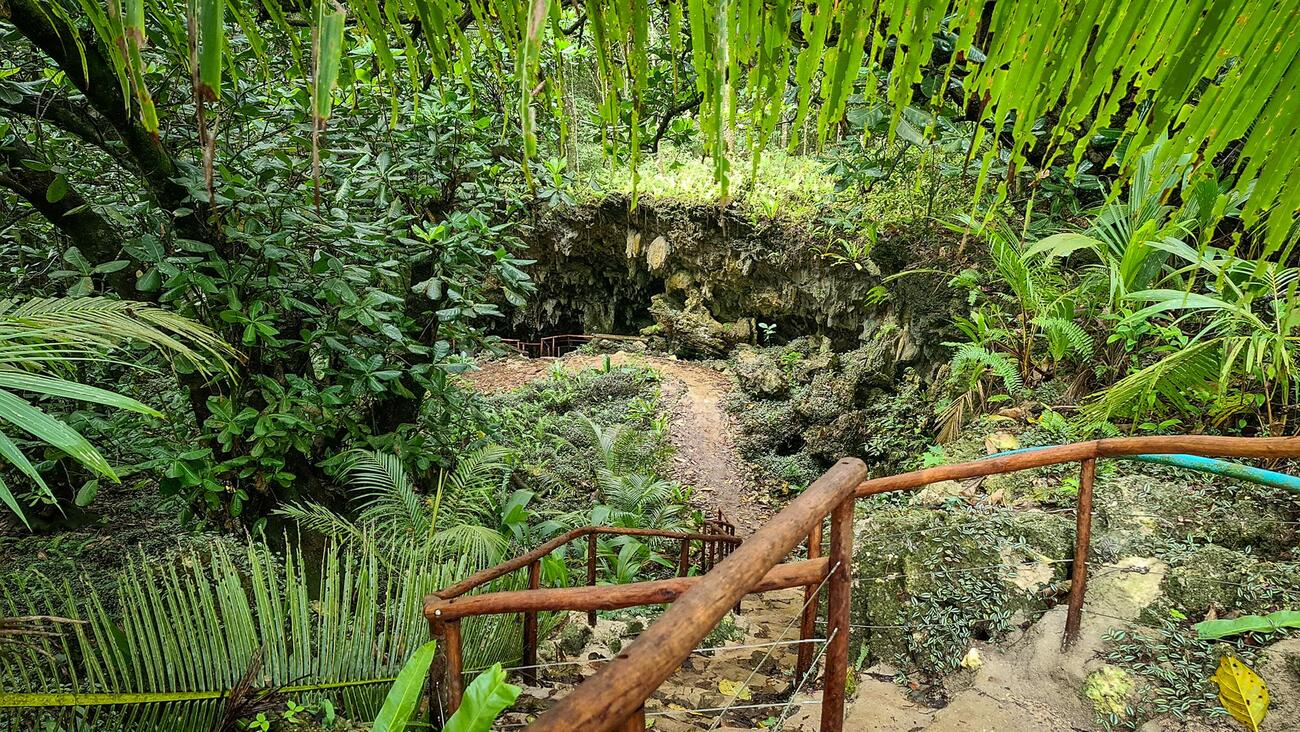 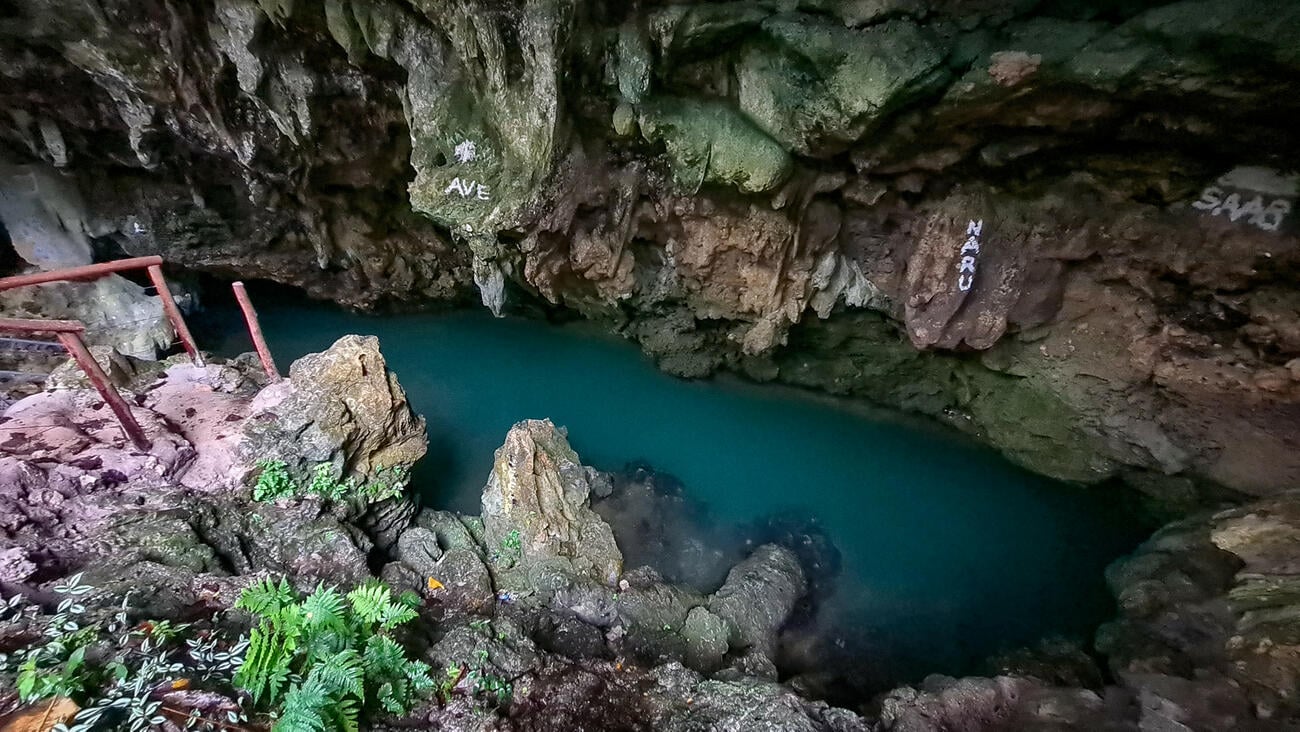 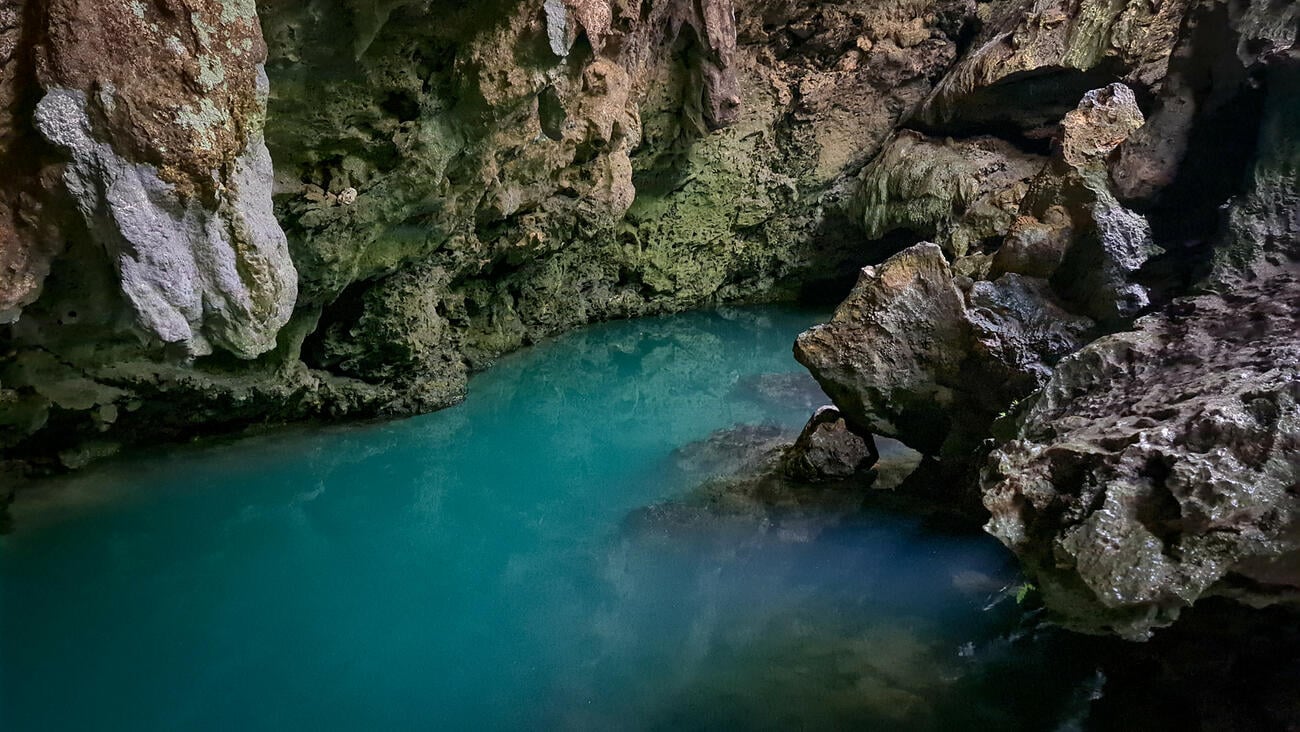 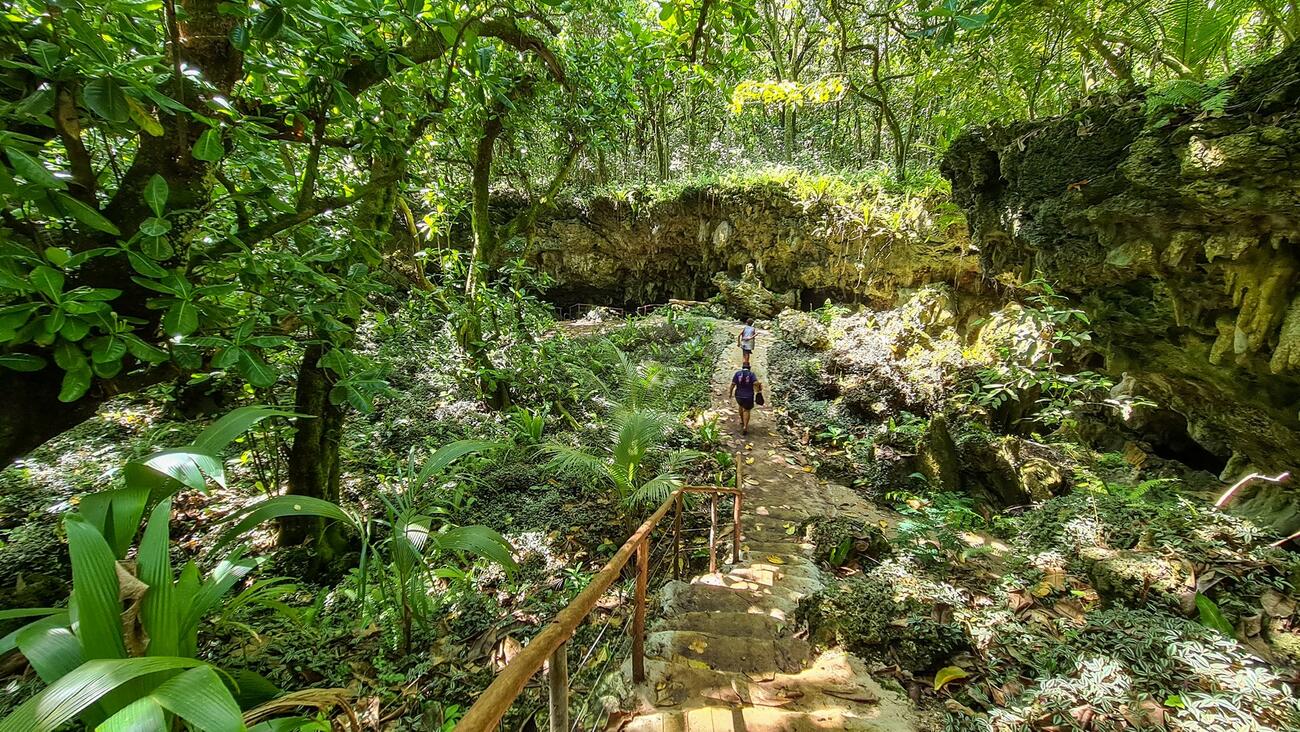 RELIGION
In most places, religion is divided on theological grounds, but in Mauke it is divided architecturally. When the decision was made to build a church, known as Ziona; they agreed that a single place of worship would be sufficient to serve the spiritual needs of both the villages, Ngatiarua and Areora. The exterior building materials and labour needed to erect the church was duly contributed by both villages. However, it wasn’t until the structure was raised that the problems began.
Once the structure was erect, the two villages could not agree on the design of Ziona’s interior. Eventually a decision was made to combine two different designs into the churches structure - each to the preference of the villages. Two doorways were cut in the walls, and two separate walkways were made to enter the church. Sticking to the status quo, each had pathway also had its own distinctive carved coral portals leading up to each villages door. A wall was initially built down the middle of the church to separate the two villages, but later taken down and replaced with a pulpit, where the pastor stood to conduct the service with a foot in each camp. More than a century later, Ziona church still remains the same.

For Church Service days and times, visit the Top 5 Things to do on Mauke blog. 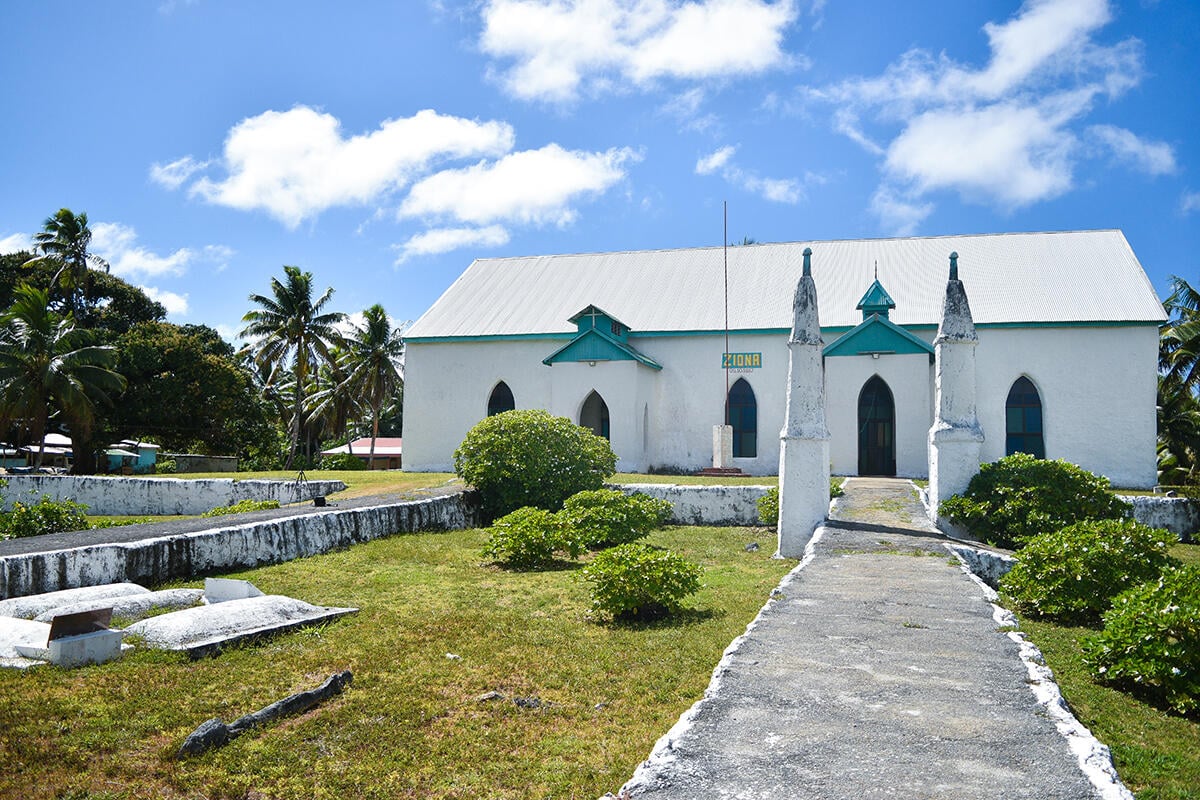 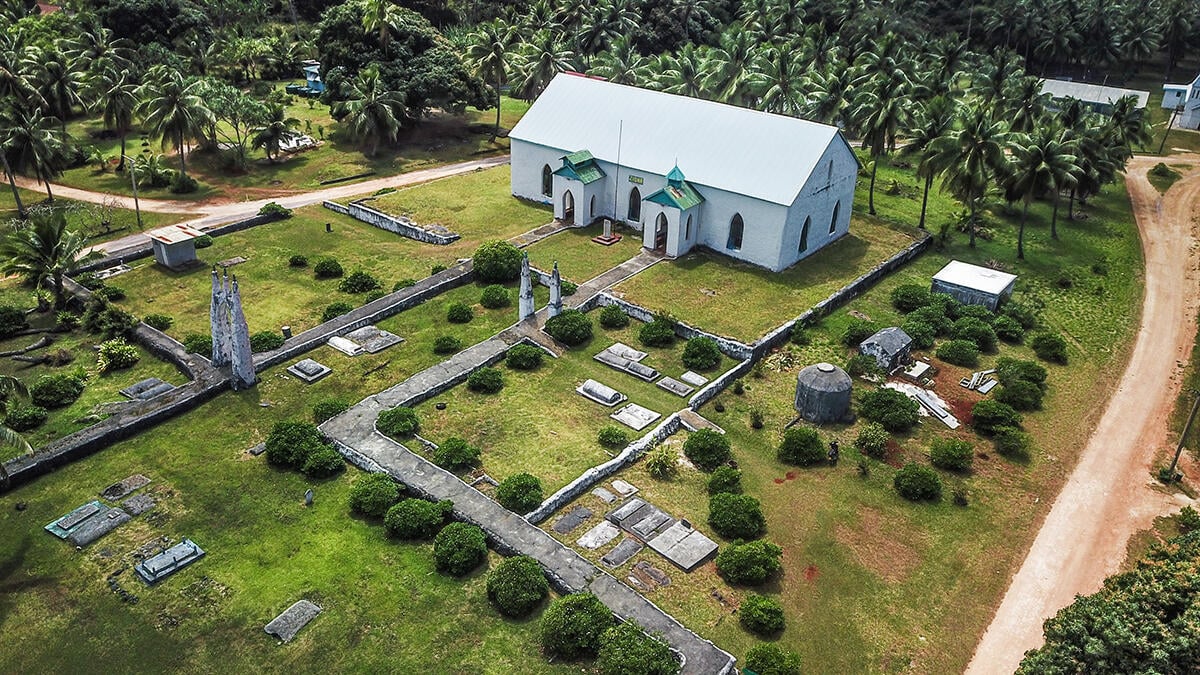 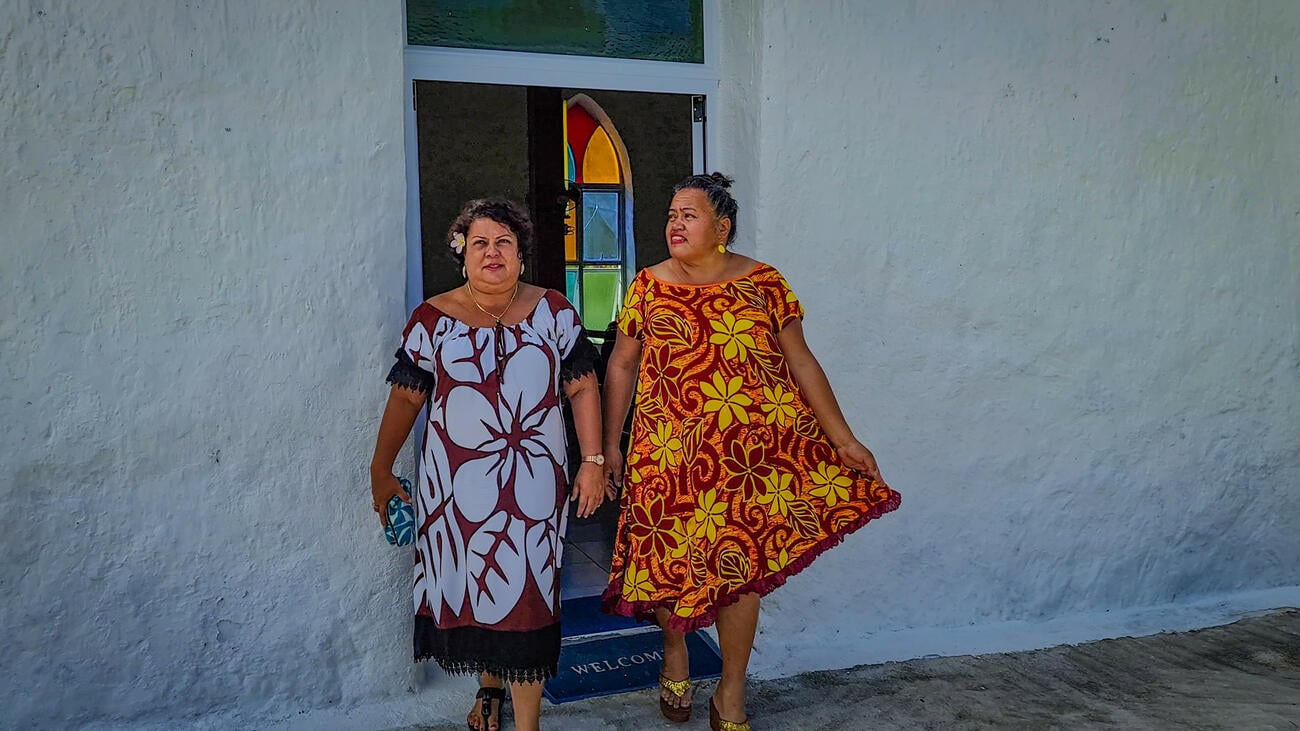 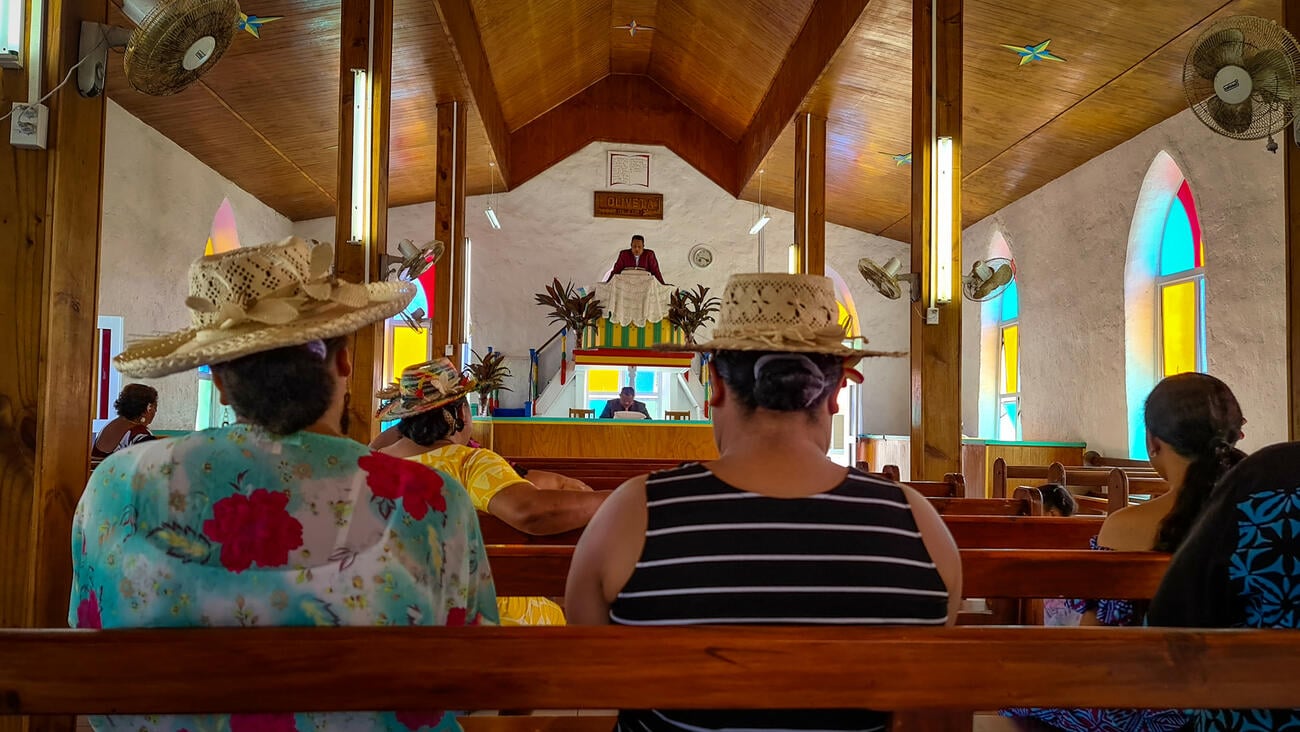 MAUKE MAIRE EI
Maire is known as the ‘flower of Mauke’. As it is often only worn by people of high importance or at prestigious events, an ei maire (garland) makes you feel like royalty almost. Picked and made on the island, Maukeans receive the majority of their orders for ei maire from Rarotonga.

Laborious work is involved in the creation of an ei maire. Maire is best picked when it is wet as this makes it easier to strip the leaves from the stem during the weaving process. You will often find mamas wearing thick overalls or clothing that cover their ankles with sneakers - suitably dressed for the task that lies ahead. Maire is found deep in the makatea (fossilized coral), hence the preferred attired as you walk over the sharp edges and points of the fossil coral rocks that surround. With filtered sunlight seeping through and a humid atmosphere, it takes normally 3-4 hours depending on the number of orders and how many available hands there are to pick.

Maire has a soft, soothing smell, which only gets stronger as the days go by. Lasting for about 2 weeks, it’s no wonder you see people still wearing their ei maire days after a special event. One local in particular would call it ‘the Heart of Mauke’ – which is why they treasure it so much. 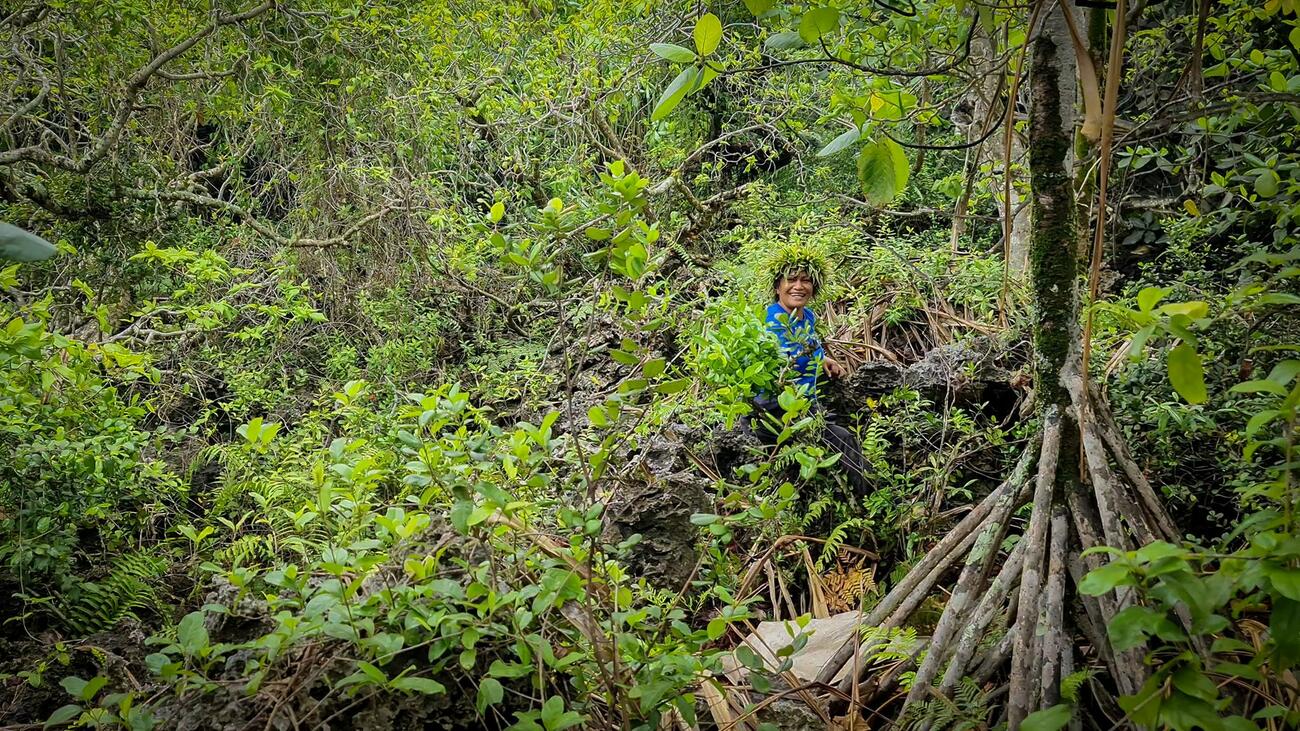 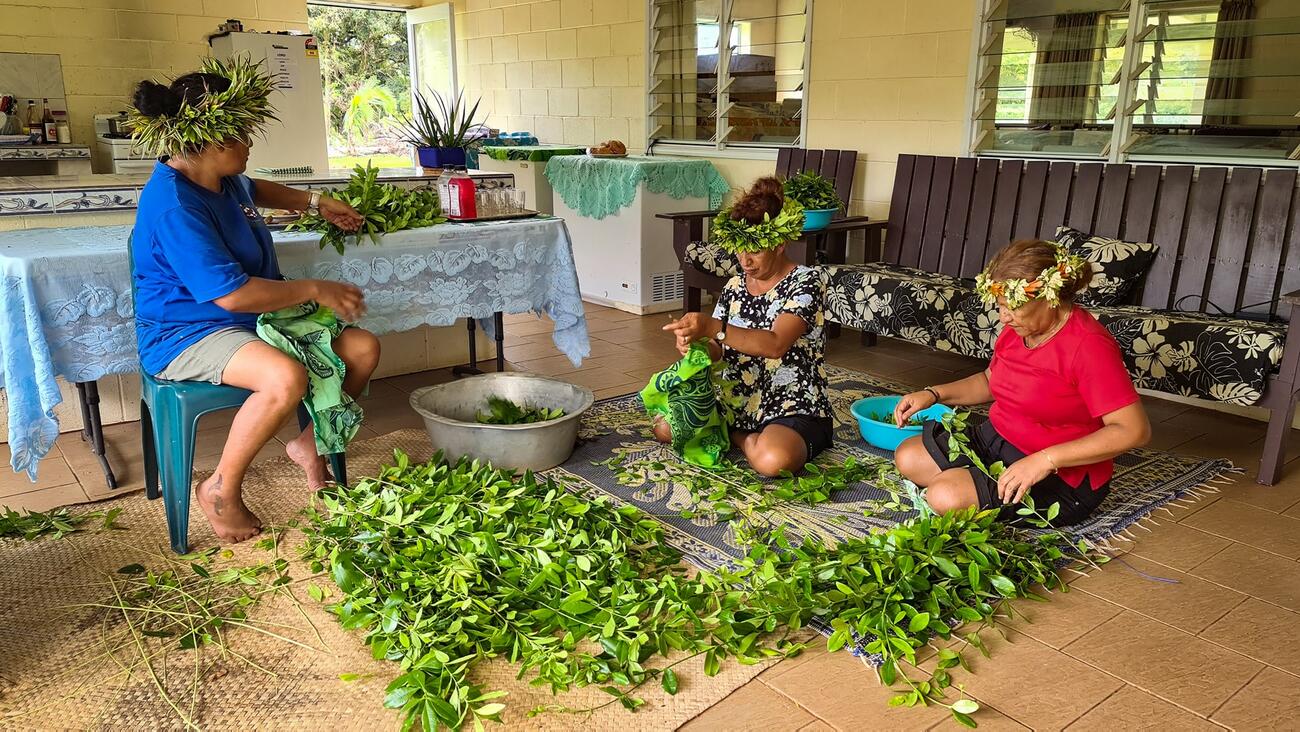 MAUKE ‘MIRACLE’ OIL
Akari Pi is considered a miracle oil used to heal wounds and irritations as well as traditional massage. The Mauke Akari Pi started with the dream of a young local girl. Locally grown Pi (Talinium Labobo) infused into organic coconut oil is a remedy staple for the people of Mauke.

THE LEGEND OF KEA
Mauke, like every island in the Pa Enua (outer islands), has it’s own unique history and culture. High on the cliffs above Araiti Cove lies Kea’s grave. Legend says that the beautiful Kea sat upon this cliff watching while her husband, Paikea, fished beyond the reef. Paikea was known to be a great fisherman, but one day, as he was about to head home with his catch, he was swept up in a storm which carried him further and further out to sea. Thankfully he ended up alive on the island of Mangaia, but Kea, unaware of this, thought he had died at sea. It’s said that Kea never left the cove, and remained there day after day, until she eventually died. 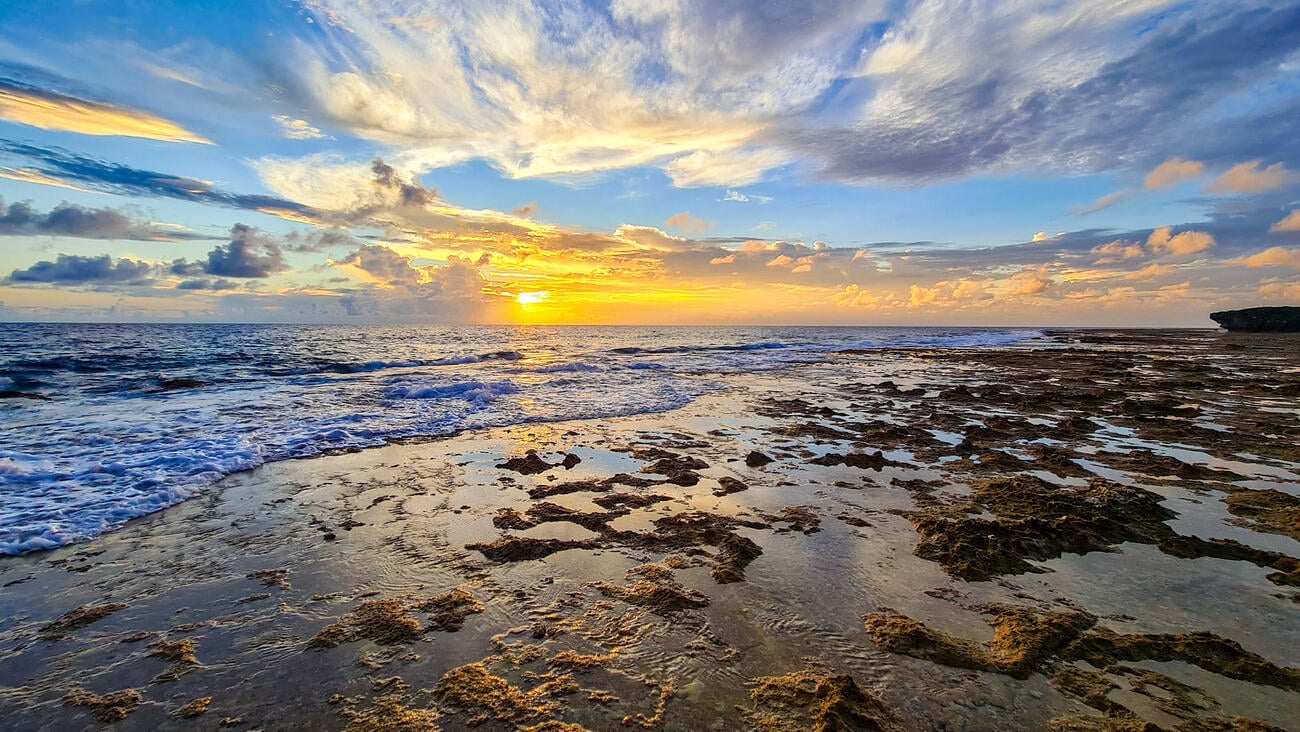 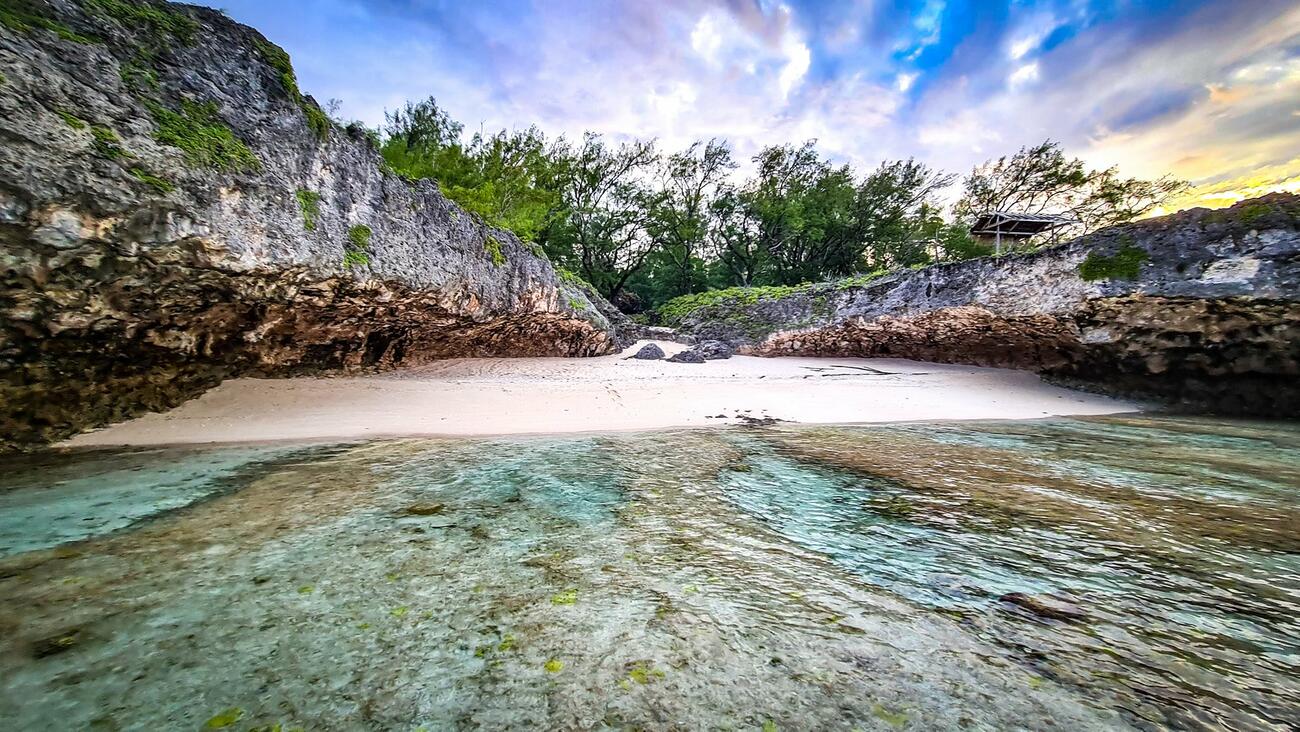