14th May 2018
By
Alistair Blount
Photography By
Briar Blount

Pa Teuruaa is a tourism legend in the Cook Islands, mostly for his pioneering eco-tourism venture Pa's Treks that has challenged and delighted thousands of international travellers on Rarotonga's rugged cross-island track for thirty-three years. 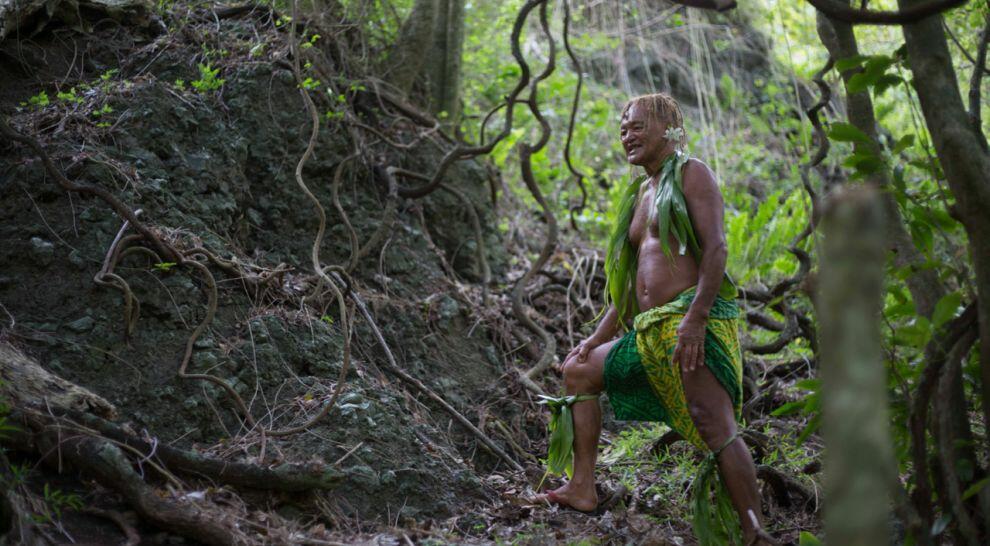 Pa is one of the most engaging and colourful characters the Cook Islands tourism industry has ever included amongst their own.

His spiritual connectedness to the island of Rarotonga is undeniable, a fact that has been acknowledged from afar even by the likes of the Dalai Lama.

In 2000, a group of Buddhist monks, followers of the Dalai Lama, came to see Pa to ask if he knew where the main energy point was on Rarotonga.

Pa led the monks to the base of The Needle (Te Rua Manga) where they buried an urn with the 900-year-old remains of an ancient master.

“The energy point is right around The Needle, and the urn is still there. The Dalai Lama blessed the needle when he named it one of the eight energy points in the world.”

Pa said the Rarotonga energy point was a place where ancient Polynesians were spiritually rejuvenated. 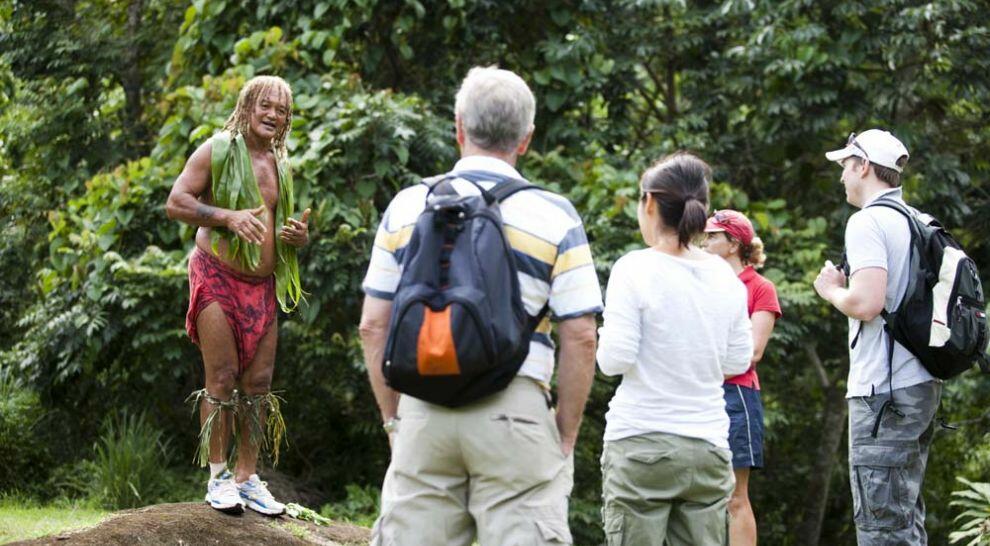 By this time Pa was well known around the world, often written about and filmed by the international media. He was then, and remains today, as one of the most recognisable images of the Cook Islands.

For Pa trekking the mountains of Rarotonga began when he was a child. His grandmother sent him to gather medicinal leaves and herbs for traditional healing. Over the years Pa grew knowledgeable on ancient natural medicines.

His reputation as an herbalist has attracted medical people and others from around the world.

“Many people on the nature tour have pen and paper to record what they hear about the herbs and plant medicines,” Pa said.

Pa’s entire life has been centred on all things natural, healthy and spiritual. Keeping in shape has always been a natural priority throughout Pa’s life.

A former Ironman, competitive swimmer, and lifeguard, Pa once swam from Mo’orea to Tahiti in French Polynesia just to connect to his ancestors.

That story became a children’s book: Pa and the Dolphins: A true story of Pa, Rarotongan hero and his return journey to Tahiti written and illustrated by his business partner and wife, Jillian Teuruaa-Sobieska.

Jillian played a major role setting up Pa’s Treks in the 1980s, and continues to this day taking bookings, making lunches, and arranging pick-ups and drop-offs for participants.

Over three decades, Pa and Jillian built up a successful business.

In 2013 Pa was presented with one of the most coveted individual Cook Islands Tourism Industry Awards.

“I do everything from the heart. I am dedicated to the people, and I am very thankful for my life. When I was given the ‘Outstanding Contribution to Cook Islands Tourism Award’, I was so humbled.

“When my name was called I went up on stage a said a little prayer.”

Pa is a proud Polynesian man who is equally proud of his humble beginnings.

Born and bred in Matevera Pa said he has a fond memory of his parents and family. His father grew and exported oranges to New Zealand.

Pa recalls the day in 1959 when his life changed. He asked his father to pay for his passage on the Mariposa, which was about to set sail for Auckland. For thirty pounds Pa moved to New Zealand at age 15. He had no English; relying on a boy he was travelling with to begin teaching him the language. Pa’s first job was in a factory as a car painter. 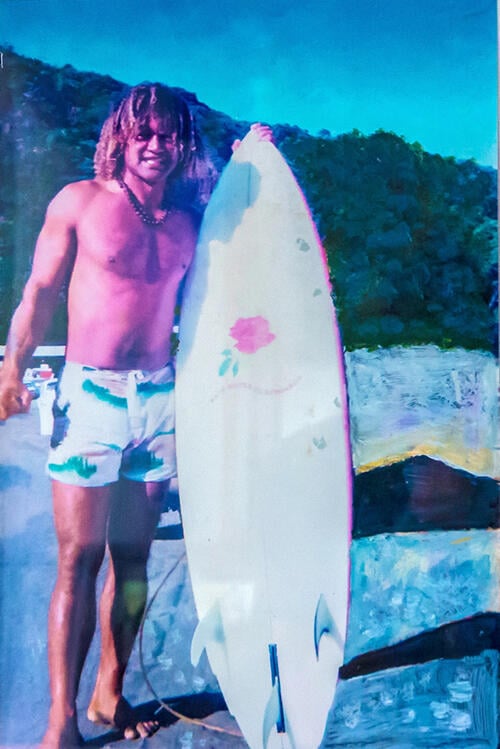 “It was hot all the time, so I’d go to the local pool at lunchtime and after work. I liked swimming so I got a part-time job at the pool. I joined the swimming squad at the Newmarket Swimming Club and never looked back. I became a champion swimmer winning lots of competitions. I was only seventeen.” Pa progressed from competing in the pool to open sea racing.

“The distance didn’t matter I just enjoyed swimming. I competed for around twenty years until 1981.”

Pa’s swimming prowess came to the attention of surf clubs and soon he became a professional surf lifesaver during summers, at the same time competing in in life saving carnivals.

“I was a Malibu board and surf ski champion.

“There was no motorboats or surf belts in those days, and sometimes I had to swim through 15 foot waves”.

Pa spent sixteen years in Auckland before heading off to Sydney in 1978 to try his luck in the life saving competitions.

“I competed in Iron Man; best I ever did was coming third”. 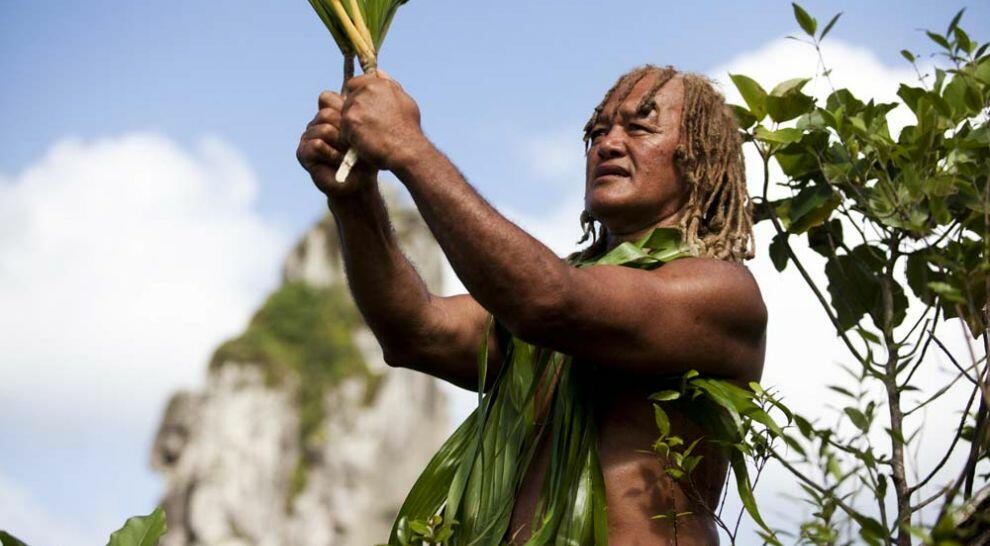 After a year he returned to Auckland to work for a while as a lifeguard. In the early 1980s Pa came home to Rarotonga on a one-way ticket.

“Nothing eventful happened until New Year’s Eve 1986,” said Pa. “That was the time of Cyclone Sally, one of worst natural disasters ever to hit the Cook Islands.

“The cyclone took the roof off my house blowing it onto the back road. Jillian was with a girlfriend driving around the island when they saw my roof. They wanted to see where it had come from so they walked down to my house. That was 11.00am on January 1, 1987. Happy New Year!”

Pa said he and Jillian both knew the moment they met was a spiritual connection. A new resident on the island, Jillian was an artist who worked part time in the tourism industry.

“Open minds have kept us together ever since. Amen!”

Pa and Jillian went into business with Pa shortly after they met.

“I had been doing mountain walks, but decided to go professional. We set it up as a business, and we are still going!”

Pa stopped cross-island hiking in 2016, though he still takes one occasionally; his nephew Bruce leads the cross-island nowadays with Pa concentrating on the nature walks.

Pa does not intend to leave the tourism scene any time soon.

“My vision for the future of the Cook Islands is for tourism to look after and nurture its natural environment, and develop good eco tourism connecting to nature, keeping away where possible from man-made attractions.

Pa said he would like local people to become more involved with the development of eco tourism, and overseas Cook Islanders should be encouraged to work here: ‘Bring back the locals!’

One of Cook Islands ‘living treasures,’ Pa Teuruaa is a spiritual and dignified man, surrounded by a serene aura that instantly calms those in his presence.

“I am a guru of nature, and proud of it,” concluded Pa.