Described as “Treasure Island” or as “the most romantic island in the world” by author Robert Louis Stevenson’s wife Fanny, Suwarrow does indeed reflect these descriptive names honestly.

A low lying coral atoll that is the most southern of the northern Cook Islands, it is reputed to have had Polynesian settlers in prehistoric times. But when the Russian ship Suvorov – reportedly following clouds of birds – landed in 1814, no-one was there. And so the ship – named after General Alexander Suvorov, (who appears as “Suwarrow” in Lord Byron’s epic Don Juan) bequeathed the island its name. With one of the best harbours in the Pacific, the reef encloses a large landlocked lagoon and the pristine islets that form the island are scattered around the rim. At about one and a half times the size of Rarotonga, it is indeed one of the most perfect of the islands in the Pacific however inaccessibility makes it a haven to only the most intrepid. Along with its susceptibility to cyclones which often create waves that sweep right over the atoll.

Today, only two caretakers live there and intermittently. But in between its discovery and now, the island has been made famous by many a romantic tale. One was how it claimed to be Treasure Island – when during the mid 19th century, a ship from Tahiti salvaging the depths of the reef unearthed an old iron chest near the shores of Anchorage Island (one of the better known on Suwarrow) with some $22,000 (now $5million US) in coins. 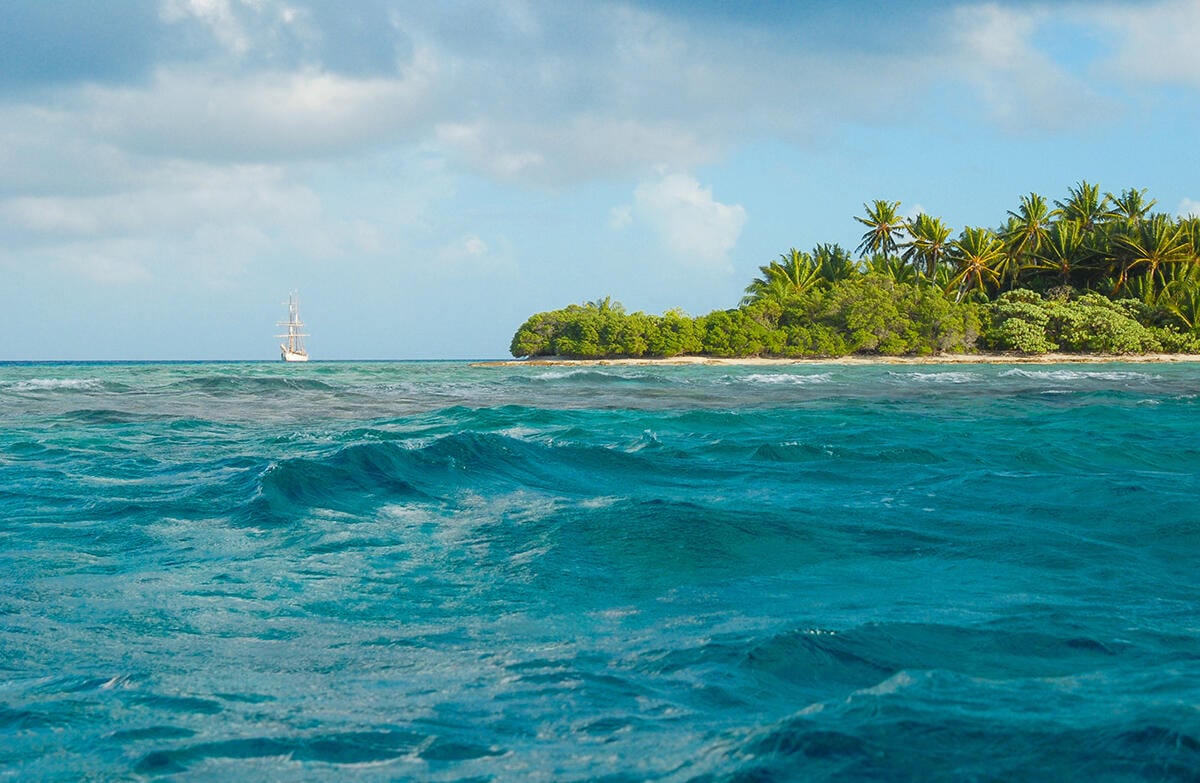 In 1876 a New Zealander Henry Mair found eight pieces of jewellery in a turtle nest. Unfortunately he was unable to carry it, so he buried it with the intent of returning. However years later he was set upon and clubbed to death by natives in the New Hebrides; no trace has been found. The coins were from 100 years prior when British and Spanish ships regularly navigated the seas. In fact for 250 years Spanish galleons crossed the Pacific from the American west coast and Mexico to the Philippines and it is believed that some may have lost their way and became shipwrecked through the violent storms and cyclones. Proof lies in the discovery of stone walls and platforms, lime kilns, a flintlock, a musket and a skeleton during the 1870s when the tall forest and banyan trees on Anchorage Island were being cleared.

However, Suwarrow’s greatest fame comes from the late Kiwi recluse Tom Neale, who lived on Suwarrow at three separate times during his lifetime between 1952 and 1977 (a total of 15 years). He spent his time tending his garden, raising chickens, catching fish and hunting for coconut crabs. A Kiwi sailor who dreamed of living alone on a tropic isle, he read about Suwarrow and fell in love with it when his ship stopped there in 1945. This “hermit of Suwarrow” stayed on his dream island until he was forced through ill health, to return to Rarotonga where he died at the age of 75. His tale “An Island to Oneself” about his experience of living on this remote atoll turned the secluded haven into one of the most renowned of the South Seas. Fascinating and moving, no doubt fellow yachties around the world were charmed by his reasons for living this lonely life - “I chose to live in the Pacific islands because life there moves at the sort of pace which you feel God must have had in mind originally when He made the sun to keep us warm and provided the fruits of the earth for the taking.” To which there is probably no further incentive needed to discover this island for yourself. 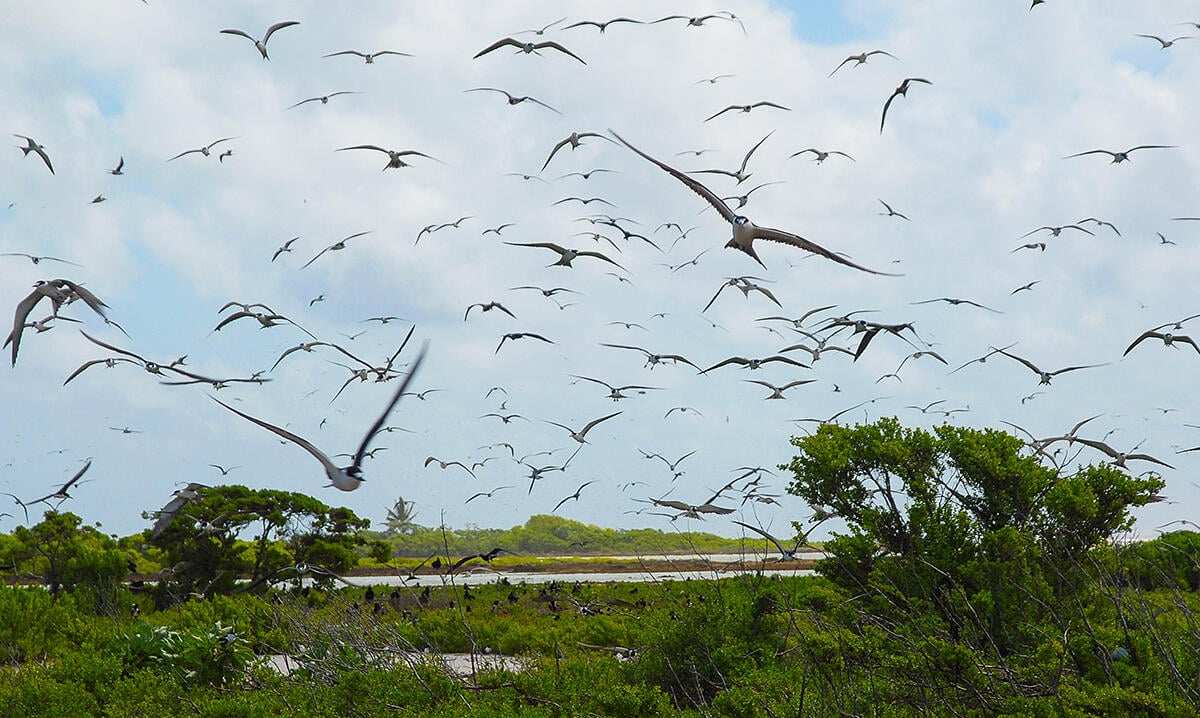 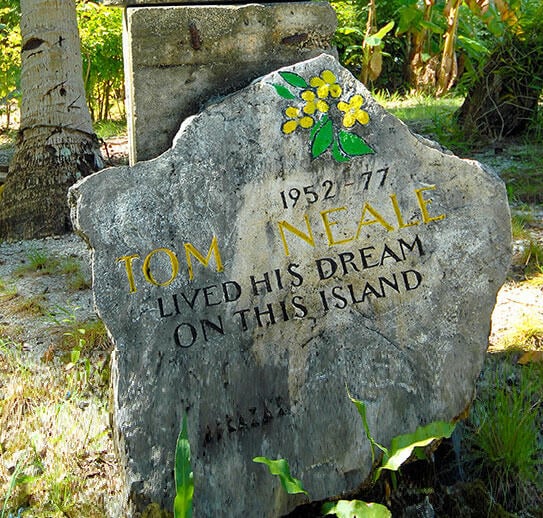 The great travel writer Robert John Frisbie (known in the islands as Ropati) with his children spent almost a year living in Suwarrow. His story of their survival in one of the worst storms on the tiny motu became his celebrated book ‘The Island of Desire’. Tom Neale’s own book came about due to his friendship with Ropati, whom he credits for being his inspiration.

The treasures of Suwarrow however, lie not only in the land. Herbs and shrubs and beach heliotrope grow in abundance with the larger islands covered in dense tou – hence the name Motu Tou, which is one of the westernmost islands of this atoll. It is also one of the most important breeding grounds for ten species of seabirds with thousands of them continuously gliding and swooping in the skies above. About 80,000 sooty terns nest here, but the most amazing is the Masked Booby – one of the biggest in the species. Approximately 3% of all Red-Tailed Tropicbirds breed here (about 400) and at least 9% of the global population of the Lesser Frigate bird (about 8500), usually on Gull Islet. For the ornithologist this is a wonderland.

But it doesn’t stop there. As well as a million seabirds, marine life is miraculous. A vital breeding spot for green turtles and coconut crabs - the lagoon is teeming with colour. Batfish, Moorish idols, starfish and grouper are to be found amongst the kaoa which cut out of the lagoon and provide superb snorkelling sites. In the waters outside the reef are trevally, barracuda, white tip and black tip reef sharks, grey reef sharks and those gentle giants, Manta rays – swimming idly by with even the odd false killer whale from time-to-time.

All this abundance was good reason to make Suwarrow a National Park of the Cooks in 1978. The island itself and its surroundings is Crown Land under the jurisdiction of the Cook Islands.

Although it is only possible to discover these treasures through private yacht or chartering a vessel and it is essential to let the caretakers know you are coming, venturing to these shores brings a lifetime of memories of pearly beaches, swimming and diving in crystal clear blue lagoons and sleeping under a starry night. What better treasure than that?